Both pedigreed cats and mixed-breed cats have varying incidences of health problems that may be genetic in nature. Bombays are generally healthy, although some of the genetic diseases seen in Burmese has also been seen in Bombays

GM2 gangliosidosis is a degenerative, fatal neurological disease characterized by severe muscle tremors and loss of motor control. In Burmese cats, the disease is caused by a mutation in the feline hexoaminadase β-subunit (HEXB) gene which leads to abnormal swollen neurons and brain lesions. The inherited condition in affected kittens is first observed at 6-8 weeks of age beginning with mild tremors and leading to difficulty eating and lack of coordination. The condition is inherited as a recessive, autosomal disorder.

Burmese Hypokalemia, also known as Familial Episodic Hypokalaemic Polymyopathy, is a recessive genetic defect characterized by episodes of low serum potassium levels and high CPK (creatine phosphate kinase, an enzyme that indicates muscle damage). Clinical signs include episodes of skeletal muscle weakness which can affect the whole animal or may be restricted to certain muscles. This is most obvious in the neck muscles, but sometimes occurs in just the limbs. As a result affected cats may show problems with walking and holding their head correctly. The disease is not typically fatal and affected cats usually can be managed by adding potassium supplements to their diet. For specifics on management of this condition, owners are urged to consult with their veterinarian.

Breeds that are at risk for this disease include: Burmese and outcrosses such as Burmilla, Bombay, Cornish Rex, Devon Rex, Singapura, Sphynx, Australian Mist, Tiffanie, and Tonkinese.

This craniofacial abnormality is occasionally seen in newborn kittens, which may have severely deformed heads. Breeders should research pedigrees carefully to make sure they don’t breed cats who carry the gene for the defect.

There’s also a test nowadays for the BHD.The tests are done with DNA collected from buccal swabs thus avoiding invasive blood collection. Breeders can use these tests as a tool to avoid breeding carriers together which would produce 25% affected offspring.

Bombay used in breeding should be DNA tested for Burmese Head Defect unless both parents are proven to be freed. 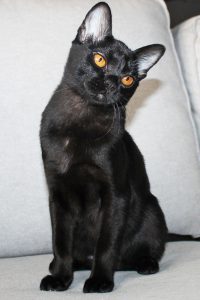